5 years since the establishment of the Bulgarian Convention Bureau – BCB

Under the motto “Going forward”, in the presence of its members and partners, the Bulgarian Convention Bureau – BCB celebrated its first anniversary – 5 years since the establishment of the organisation!

On June 15, 2021, in Grand Hotel Millennium Sofia, the Bulgarian Convention Bureau gathered its members for the year’s first live general assembly meeting. During the assembly, the 2020 year-end accounts were reported, as well as the executive director, Mrs. Teodora Jilkova, has been informed of the key activities undertaken since the beginning of 2021. Members learned in detail about the CVB’s involvement in the latest editions of ICCA Business exchange programs, organised by ICCA, of which BGCB is a member since 2018 and the positive responses received so far for hosting international events in Bulgaria.

Within the report were also presented the series of meetings held between the organisation and Sofia Municipality in line with the ongoing initiative for strengthening the collaboration between the parties and more strategic presentation of the meeting assets of the Capital.

The team was proud to announce and demonstrate the brand-new website, showcasing detailed information about the cities, meeting facilities, and various service providers, including virtual tours and forthcoming events.

With the closure of the administrative issues, the event switched to its festive mode on the occasion of its first anniversary – 5 years since its establishment.

The event industry, recognised as the backbone for the growth of almost every economic sector, is one of the most important factors for the development of urban tourism and small and medium business – restaurants, hotels, transport, logistics, advertising, art, and show business. Therefore, united, and ready to turn the current challenges into new opportunities, the members of the Bulgarian Convention Bureau honored this first anniversary under the motto “Going forward”.

The Management of the Bulgarian Convention Bureau expresses its sincere gratitude for the joint efforts and support of all members and the growing support of institutional partners. 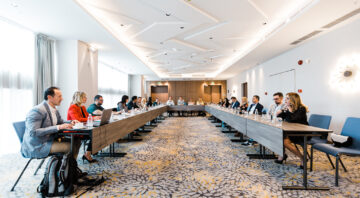